The Chapter was opened and E Comp Neil Tinkley, PrAsstGDC, announced that E Comp Barry Woodside, MEGS, was without accompanied by three Supreme Grand Chapter Officers and a member of the Provincial Team, and demanded admission. An escort was formed and MEGS entered the Chapter and was warmly greeted by MEZ, E Comp Peter Light.

The meeting then proceeded with Minutes and AOB then a Ballot was held for Bro Vaughn Whereat which, thank goodness, proved clear, as he was the candidate for the evening. The Exaltation then proceeded with excellent ritual from the main two Companions, MEZ and stand in Principal Sojourner, E Comp Neil Troud. 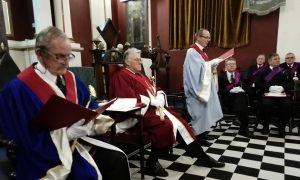 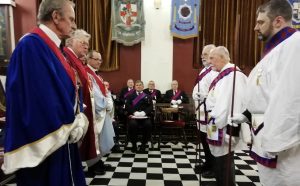 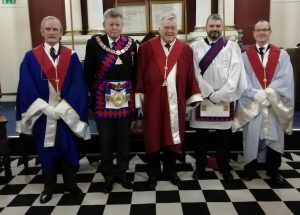 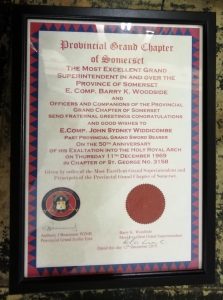 On the Second Rising

MEGS delivered the 50 year’s Certificate for E Comp John Widdicombe. He also gave a resumé E Comp John’s life through Masonry and in particular the Holy Royal Arch. Unfortunately E Comp John is in poor health and cannot make the meetings and it was asked if the Almoner, E Comp Rod Green, would arrange for the Certificate to be delivered.